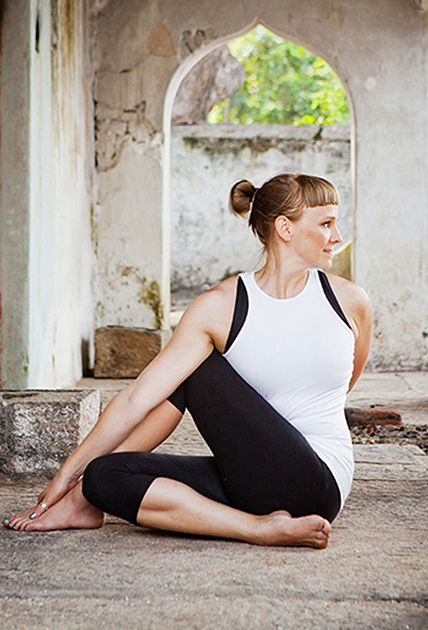 My yoga journey began in 2005. Yoga has changed myself and my life on every level in a positive way. I don’t want to imagine where I would be without having this practice in my life.

The need to share this practice and the benefits of it with others came to me naturally after some years of intense self practice and study. I started teaching in 2009 and in 2013 I established Ashtanga Yoga Manchester, a dedicated yoga studio that has been continuously operating in Manchester city centre since.

Years of intense asana yoga practice have made me interested more in the spiritual aspect of yoga – self realisation/ knowing our thru self. This, after a long search,  brought me to advaita vedanta path. I am a disciple of Sri Moojibaba, an advaita vedanta master.

Besides yoga I work with photography and recently I also started to paint. I live in Manchester with my husband, my daughter Maria and our two cats. I love hiking, gardening and everything to do with nature.

I have been practicing yoga in various guises since 2007, but started taking my Ashtanga practice seriously in 2014 after attending a Mysore workshop with Donna Southwell & Joey Miles. I didn’t know the sequence properly, but after some kind words and guidance from Donna, I felt like I had stumbled upon something magical. I immediately enrolled on a 40 hour Ashtanga Fundamentals workshop with Manju Pattabhi Jois, not having the slightlest clue that I was in the presence of one of the leading authorities of Ashtanga yoga. I was hooked.

In 2016 I began a mysore style self practice at a local shala and have devoted my studies to Ashtanga Yoga ever since. My interest in the Ashtanga method has lead me to practice with many leading figures in the community (Eddie Stern, Kino McGregor, Phillipa Asher and Tim Feldman)

In 2019 I decided to take my practice further and enrol with Evolve Yoga Training. I chose the course for its focus on Pranayama techniques, Yoga philosophy and study of the subtle body. I already held an interest in Patanjali’s 8 limbed philosophy but wanted to understand further how this could be incorporated into my daily life.

My personal practice is based around the traditional Ashtanga method, but I am also a fan of props and modifications where necessary. I believe a less dogmatic approach practice is more inclusive and allows room for creativity. I have experienced first hand how a true state of yoga can be achieved when we learn to connect the dots between breath, body and mind. My aim is to guide students towards deeper body/mind/breath awareness and explore age old yogic methods to achieve a sense of mental calm.

Movement was a major aspect of my early life having taken up gymnastics and ballet from the age of 2 so it was natural that the dynamic flow of Pattabhi Jois’s approach appealed to me. I first started learning ashtanga from a Richard Freeman dvd and fell in love with the practice. It is 5 years since I started learning and the more I practice the more I realise it’s meditative quality. The beauty of these sequences in a Mysore style class is that you can practice independently at a level and pace appropriate to you, drawing energy from the group while receiving individualised adjustments from the teacher. There is enough challenge to motivate all of us to keep coming back to the mat.

I took my practice to the next level in 2015 attending a 2 week retreat with Mark Robberbs and Laruga Glaser as well as going to Kino Mcgreggor’s workshop. It is during these intensive practices where the real transformation occurs.
Since then I have visited Mysore every year to deepen my practice, first at KPJAYI under Saraswati and then under my other teachers, M.C. Chidananda and Vijay Kumar. I completed my teacher training in ashtanga with my teacher and have assisted in his shala in Mysore. As my teacher says, it is the desire to help others that makes you a great a teacher and this is the quality I wish to take forward into my teaching. It is with great pleasure to be teaching with Aga, at Ashtanga Yoga Manchester where I am delighted to share my passion for the practice with you all.

Aside from yoga, I completed my BA(hons) in flute performance at Leeds College of Music in 2012 and teach flute and piano to students in South Manchester.